For a number of years there had been discussion of a fire station located in Essex Center.  Concern was prompted by the distance from the Essex Junction Fire Station complicated by the presence of railroad tracks and the ever-present fear that some day the passage of a train would block the response to a major fire.

The Essex Junction Fire Department provided protection by contract throughout the Town and sought a substation in Essex Center that never came to fruition because of its inability to make a capital investment outside the village.
Late in 1972, Federal Revenue Sharing Funds became available to the Town.  On January 9, 1973, then Chairman Bernard Parizo moved the Board of Selectman that an investigation be carried out by the Town Manager to determine the feasibility of a Town fire department that would be funded by the federal funds.
On January 22, 1973, the Selectboard and Town Manager met with Captain Fred Bessette of the South Burlington Fire Department and on February 20, 1973 with Chiefs Joseph Jacob, Essex Junction, and Edmund Stowe, Colchester Center Fire Department for additional valuable input.
At the annual Town Meeting in March 1973, the Select Board recommended and the voters approved a Fire Department capital budget of $95,000.  By September 1973 bids had been received and awarded to Motorola Communications for communications equipment and Maxim for a 1000 gallon pumper.  Also in September, the Board selected Trapper Brown Construction Company from a field of 16 design builders to construct the new station on Sand Hill Road.
In October 1973, Town Manager Kevin Ryan appointed Phil Noyes Sr. then first assistant chief in Essex Junction to be the first chief of Essex Fire Department.  The department was comprised of 24 volunteers who underwent 15 three-hour training sessions conducted by the newly appointed Chief Noyes, a certified fire-fighting instructor.  The South Burlington Fire Department hosted the training.  The department appointed three additional fire officers: James Ryan, Deputy Chief; Fred Bessette, Assistant Chief; and Richard Dunlop, Captain.
On March 9, 1974, with substantial completion of the station, the Essex Fire Department went into operation.  The department started with two engines, a tanker and an pumper, generously on loan from the Colchester and Burlington Fire Departments.
On Sunday July 28, 1974, the Essex Fire Department dedicated its new station on Sand Hill Road.  The town purchased a 1974 Maxim pumper for $48,000 that arrived in April.  An oil truck from Elias Lyman was used to construct a tanker.  The conversion was performed by the firefighters under the direction of Sandy Ladd of South Burlington Fire Department and it took 6 months to complete.

The current two-bay block and steel building is still in use today and is currently under renovation.  In November 2001, Town voters unanimously approved a $375,000 bond and $75,000 from available public safety funds to expand and improve the existing station.

The original members of the Essex Fire Department are listed below:

The following specifications are provided to Applicants when designing commercial and or multi-family properties in the Town of Essex. All of the following requirements are in accordance with current State of Vermont Fire Regulations as reviewed by the Office of the State Fire Marshal and conform to NFPA Guidelines.   CLICK HERE 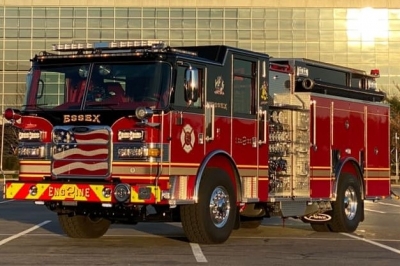 This site has been viewed 716,221 times.
News
Pictures
Apparatus
Maintained by the members and staff of Essex Fire Department. Designated trademarks and brands are the property of their respective owners. Copyright © 2006-2022. YourFirstDue Inc. All Rights Reserved. Content on this web site is supplied by Essex Fire Department. YourFirstDue Inc. cannot be held responsible or liable for any content, text, pictures, or any other media found on this web site.
Management login
Powered by